Meet Paloma, an Adelaide based artist breaking boundaries and starting conversations about periods with her work, armed with red nail polish and glitter.

Stemming from her interest in everyday objects like toothbrushes and razors, Paloma says she “started to become really interested in like tampons and pads [which can] be seen as quite a confronting object but yet its probably the cleanest object ever and its not really that confronting when you genuinely think about it”.

“I just thought it was a cool object to work with because it would just evoke conversation”, and bring awareness to menstrual inequalities, which is exactly what it has done.

Starting with experiment with her new medium, Paloma started working with just plain tampons before deciding to add red nail polish to “highlight stereotypes of females”, which got people talking because of the resemblance to bodily fluids.

Abstracting bodily fluids by adding glitter, made her work easier to look at, helping more people to feel comfortable with being confronted by the subject. 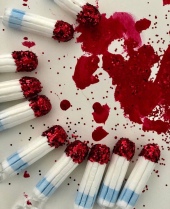 If you know me at all or have read anything on my blog, you’ll know without me saying anything that I’m completely obsessed with what Paloma is doing – and I’m not the only one.

That’s not to say the reaction hasn’t been mixed, Paloma has found it very interesting to see the male and female perspectives and also the generational element in peoples reactions.

Lots of elderly people have been very confronted by it, as well as some males, making comments like “what the hell this is so weird why are you doing this”.

But male reactions haven’t been only negative, Paloma says, “one guy who messaged me recently like ‘this is so cool, i love what you’re doing'”.

Mixed reactions have come from women too, Paloma says that “lots of females don’t even say anything”, but has received a lot of compliments in person from females.

As for what’s next, Paloma is currently working on a installation as a collaboration with her photography and period art, displaying heaps of pads and undies along with images shes taken of people interacting with them, all on a pink wall.

By photographing people with the pads over their mouths to represent the unspoken issue of menstrual inequality, as part of her installation, Paloma hopes she will continue to bring awareness to women who cannot access menstrual products.

Through her work, Paloma hopes to not only start and continue conversations around periods, but also get people more comfortable with the idea of periods.

This is already starting to happen, the more she posts about it, the more comfortable people seem to be.

Continuing on, she hopes to continue to break down barriers around periods, especially for men, which she hopes will stop girls from feeling judged by the male perspective on periods.

While it’s not hard to see why periods freak men out, they’ve never experienced or had to deal with it making it such a foreign concept, breaking down those ideas and starting conversations that lead to more understanding around periods will help to remove the shame associated with having a period.

Just from sitting down with Paloma for twenty minutes, you can see how passionate she is about making a difference for people with periods all over and I have absolutely no doubt that her art is and will continue to do this!

If you want to see more stuff from Paloma (which trust me, you do), check out her Instagram @palomasperspective